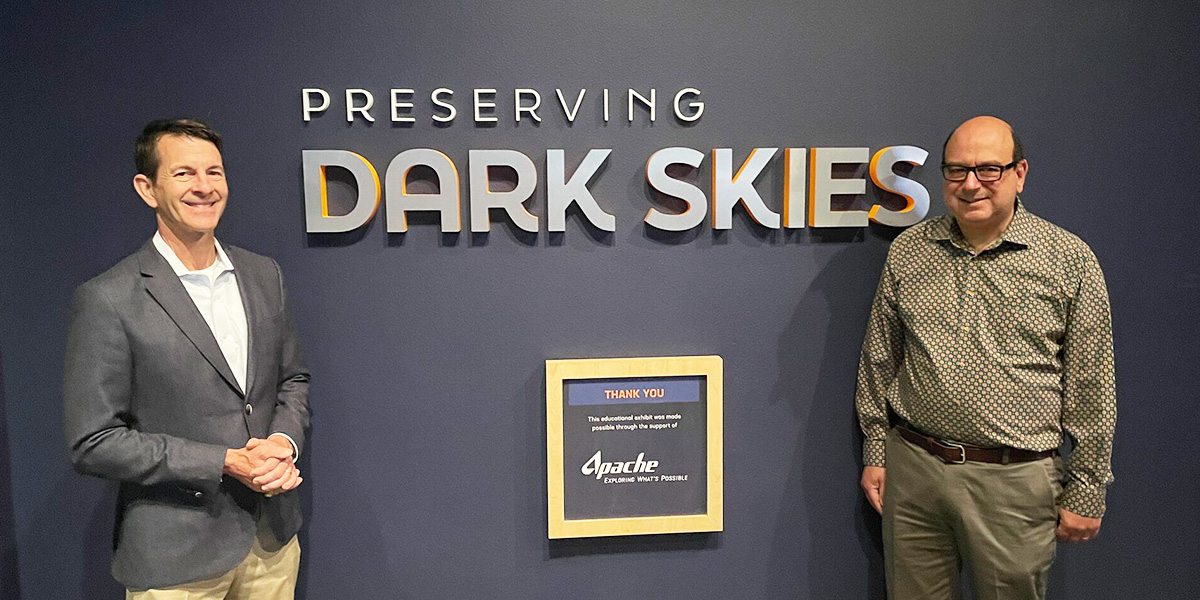 Access to electricity has made nighttime an active part of modern life — streetlights, headlights and traffic lights make it easier and safer for people to get around, giving us full visibility even on the darkest of nights. However, that visibility is often at the cost of preserving dark skies, a crucial component of not only a balanced sleep schedule, but groundbreaking scientific research.

“Light pollution is a growing problem in our society, affecting not only our own health, but the lifecycle of local wildlife and nighttime sky loss,” said Dr. Taft Armandroff, director of the McDonald Observatory. “Generations are growing up having never seen the Milky Way. The good news is, there is a win-win solution to light pollution and small changes can make a big difference.”

Today, more than 80% of the world and nearly 100% of the United States and Europe live under light polluted skies. Light pollution is any adverse effect of artificial light at night. The McDonald Observatory, an astronomical research facility of The University of Texas at Austin, is located deep in the heart of West Texas and conducts critical research supporting the discovery of early galaxies and stellar populations using high-powered telescopes that carefully record the far reaches of space.

“The work the McDonald Observatory does is key to global progress and scientific discovery – two critical components of the work we also do as an oil and gas exploration and production company,” said Clay Bretches, Apache executive vice president of operations. “When Dr. Armandroff first approached us, we were eager to learn more about how to preserve dark skies across our operations in West Texas.”

Without dark skies, the work carried out by the McDonald Observatory would not be possible. As a responsible operator near the area, Apache and the observatory began a constructive dialogue around industry best practices for nighttime lighting. The company quickly understood the importance of preserving dark skies, making operational adjustments to lighting equipment, swapping blue light for yellow light, minimizing the overall amount of light used and shifting the direction in which certain light fixtures would shine.

These adjustments turned out to not only be environmentally conscious, but economical. Light pollution is inherently wasteful as unnecessary light is used.  Additionally, the night sky-friendly lighting practice of pointing lights downward creates a well-lit work environment, which results in safer working conditions due to increased visibility and decreased glare. Once lighting adjustments were made, the company was able to operate more efficiently and offer similar solutions to industry peers looking to do the same.

“We were very glad to find a willing and committed partner in Apache when discussing the delicate nature of dark skies,” said Armandroff. “Their responsiveness really put us at ease and even became an example for others to follow.”

“Knowing that we helped support further awareness of curbing light pollution and making scientific research more accessible is something we are deeply grateful for,” said Clay.